With the Governor signing the bill on Sept. 30, 2018, AB 2923 will become law on January 1, 2019. Thanks to the hard work of Lafayette’s citizens, Mayor Don Tatzin and Vice Mayor Cam Burks, the final form of the bill is a more reasonable way for a small city like ours to address the Bay Area’s housing crisis. You can read the final text of the bill here.

The City of Lafayette opposed AB 2923 not because we wished to limit housing development, but because the Bill will likely result in reduced parking at our BART station and, more importantly, because it will remove local control over zoning and development, which we believe is unconstitutional.

The City of Lafayette – which incorporated in 1968 when residents sought to have their own say on zoning and housing development – has built or approved over 300 multifamily units since 2006. We have worked to address the housing crisis facing the Bay Area and California. Now that AB 2923 will become law, the City looks forward to working closely and collaboratively with the Bay Area Rapid Transit District on its Access Plan and transit-oriented development on land it owns adjacent to the Lafayette BART Station.

AB 2923-What Lafayette Has Done

Assembly Bill 2923, sponsored by Assembly Members David Chiu and Timothy Grayson, will remove a city’s zoning and land use authority on BART-owned land within ½ mile of a transit station and hand it over to the BART Board. The bill is now on Gov. Jerry Brown's desk for him to sign or veto. The City of Lafayette has worked diligently to meet its housing obligations. In fact, since 2006, over 300 multifamily and townhouse units have been built or approved within ½ mile of the Lafayette BART station, including Town Center with a pathway to the BART station, shown above. You can find a table providing a list of downtown projects with below-market-rate housing units that Lafayette has approved since 2000 here.

Lafayette Mayor Don Tatzin, shown above with East Bay officials opposed to AB 2923, sent a letter to Gov. Brown urging him not to sign the bill into law. You can read the Mayor's Sept. 10, 2018, letter here. The East Bay officials show with Mayor Tatzin, above, held a news conference on Sept. 17, 2018. Here is media coverage of that conference:

Background Information (Prior to Sept. 2018)

On August 28, 2018, AB 2923, the transit-oriented development bill that would put BART in charge of land use at transit stations,made it off the Assembly Floor 44-25. You can see the votes below. Assembly Members Baker and Frazier (and a few others outside the East Bay) spoke in opposition to the bill on the floor. 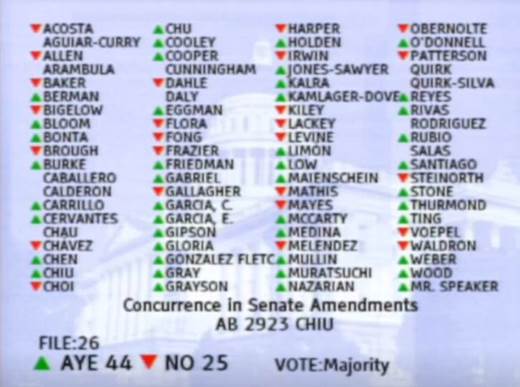 It is now up to Gov. Brown to sign or veto the bill. You can express your views on AB 2923 to the Governor by contacting him here. You can use these talking points when writing the Governor:

Lafayette City officials have been active in opposing this precedent-setting bill for several weeks now. AB 2923 has been amended in important ways from the original bill, largely due to the tireless efforts of Mayor Tatzin and Vice Mayor Burks. Notably:

Pro and con arguments concerning AB 2923, a bill that, if passed, would give BART local control over development and zoning near its stations, were published August 4, 2018, by the Bay Area News Group. The con argument was authored by Lily Mei, Mayor of Fremont, and Lafayette Mayor Don Tatzin, and signed by a number of Bay Area mayors and public officials. You can read both arguments below:

Lafayette Mayor Don Tatzin was quoted in a August 15, 2018, San Francisco Chronicle article about AB 2923, Housing on BART land has been a third-rail issue. Will this effort be different? “Why does BART suddenly need this greater power?” asked Lafayette Mayor Don Tatzin, who, like other critics, said he has no problem with development next to a BART station — he just doesn’t want BART to control the process. You can read the entire article here.

Assembly Bill 2923, sponsored by Assembly Members David Chiu and Timothy Grayson, will remove a city’s zoning and land use authority on BART-owned land within ½ mile of a transit station and hand it over to the BART Board. The bill, which will affect Alameda, Contra Costa and San Francisco counties, requires BART to adopt transit-oriented development (TOD) standards that establish minimum development regulations for the land that it currently owns, or may own in the future. You can read AB 2923 here. Although this is a statewide bill, it only affects three Bay Area counties. Cities in these counties would have their local zoning authority abolished on BART-owned land within a 1/2 mile buffer zone around station entrances wherein BART could develop projects under its own standards for density and height. You can see a parcel map of Lafayette with BART's proposed 1/2 mile radius here.

BART currently owns the commuter parking lots on the north side of Highway 24 in Lafayette. BART’s current TOD standards for the Lafayette station are a minimum height of five stories and a minimum density of 75 housing units per acre. You can read BART’s full TOD guidelines here. The current zoning for the BART-owned parcels in Lafayette is R-10, which permits single-family homes on ¼ acre lots. In the downtown located south of the freeway, Lafayette allows multifamily housing at a maximum density of 35 housing units an acre and a maximum height of three stories. The City Council has sent a letter to Sacramento objecting to the loss of local control over land use. You can read that letter here. The City of Lafayette would like to hear your views on Assembly Bill 2923. Should BART decide local land use and development issues or should these decisions be made by city governments through their local zoning processes? Please provide your opinion on this important matter here.

The bill has passed through committee and is now going to the full Senate for a vote. The Council asked Mayor Don Tatzin to send another letter opposing AB 2923 to Senators on the Transportation and Housing and Governance and Finance Committees, which you can read here.

It is important to make your views known to the co-authors and Lafayette’s representatives in the Legislature, Assembly Member Baker and Senator Glazer, you can email them at the following addresses: