What Exactly Is Going On With BART’s South Parking Lot?

The project to provide more – and safer – bicycle and pedestrian access to and from the Lafayette BART station is the source of much chatter on social media and subject of several recent media reports. But what is the project all about, when did it begin, and when was it approved? Here are the facts. 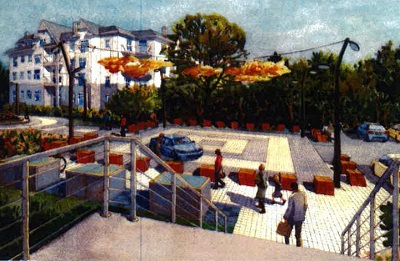 Plans to create a welcoming entry to Downtown Lafayette along with a safe pedestrian and bicycle access to the Downtown from BART began in 2014, when the Town Center condominium project was under review. As a condition of approval, and within their property, the Town Center developers were required to upgrade the existing narrow asphalt pathway leading to BART by widening and resurfacing it with the City’s decorative pavers and adding benches and landscaping. (That segment of the pathway was completed in 2018.) Given that the last leg of the pedestrian/bicycle connection from Downtown to the BART station remained unimproved, unattractive and not compliant with ADA requirements, City staff met with BART and EBMUD, who owns the land on which the southern BART parking lot is located, to gauge their willingness to upgrade it. Both agencies were supportive of the City’s efforts.

At a public meeting in May 2016, the City Council authorized staff to apply for an MTC grant for this BART pathway and bicycle parking project which would tie the BART station to the rest of the Downtown. Plans in the grant application called for (1) the existing, disjointed path that connects BART to Town Center to be replaced by an ADA-compliant, well-lit pathway and, (2) the creation of an entry plaza directly in front of the BART station staircase that would also be used as a vehicle turnaround. You can read the grant application here. A $1.9 M grant to Lafayette and BART was awarded in 2017.

In April 2018, again at public meeting, the Council approved the project’s design budget with a $12,500 local match from General Fund as part of the City’s Five-Year Capital Improvement Program, which does not require review by the Design Review Committee or the Planning Commission. This is standard practice for Capital Improvement projects. At the time, it was anticipated that 17 parking spaces would need to be removed to accommodate the entry plaza. To mitigate the removal of parking, the project also included a secure 60-space bicycle storage building to be funded by BART. The Council authorized the City Manager to execute design services contracts so that the engineering and design work for the project could begin.

Included in the plans was a proposal for a suspended art piece above the entry plaza, which would be paid entirely by art in lieu fees that can only be spent on public art. You can read the minutes of that meeting, including public comment, here. The Council directed that the art element return at a later date for approval. Also in April 2018, the Transportation & Circulation Commission and the Bicycle & Pedestrian Advisory Committee heard the Five-Year Capital Improvement Program, which included the BART pathway and bicycle project. You can to listen to the audio file for meeting details and discussions, as well as view the agenda, here.

In July, 2018, the City Council approved Kinematics Lab as the preferred artist and “Dandelion Seed” as the preferred art piece and authorized the artist to begin conceptual designs. You can listen to audio and review the agenda and staff reports of that meeting here. In addition to the City Council’s review, the Dandelion Seed art piece was on the agenda at nine Public Art Committee meetings where the public could provide comment. You can read minutes of the final meeting, March 20, 2019, by scrolling down here. At its May 13, 2019 meeting, the City Council approved the design for the Dandelion Seed and the contract for Kinematics Lab. You can read the minutes of that meeting here.

In summary, the BART pathway and bicycle parking project is about increasing safe access for pedestrians and bicycle riders to the station, encouraging alternative modes of transportation which will lessen congestion in the Downtown and along Happy Valley and Deer Hill Roads and creating a welcoming entry to our Downtown. The 19 BART permit parking spaces are being removed to create the plaza and turnaround; not because of the art piece. These 19 parking spaces will be replaced by 60 bicycle spaces, thus encouraging people to ride to the BART station instead of driving. (Approximately 3,750 riders enter Lafayette’s BART station each weekday, and of those approximately 1,050 commuters, or 28%, access the station by walking or biking.)

The $230,000 for the Dandelion Seed is being paid for by art-lieu fees which can only be used for the creation of public art; it cannot be given to the schools, as explained in the City Attorney’s memo here. The art piece cannot be relocated further east over the existing cul-de-sac which remains by Fire District requirements for the Town Center condos because it will get in the way of the engines raising their booms to put out a fire.

It is important to note that the City is looking for ways to increase parking for our residents who use BART. Since 2016, the City has added 40 Lafayette resident-only parking places on Happy Valley Road. These spaces, in contrast to BART’s permit parking, are for residents of the City of Lafayette only. You can find information about Residential Parking Permits here. Additional Downtown streets near BART are being considered for this program to increase the supply of long term parking for residents.

At a special meeting on June 4, 2019, the Lafayette City Council heard a presentation from Paul Kimura, Principal, Avery & Associates, the executive search firm that has been retained to undertake the nationwide recruitment for Lafayette’s next permanent City Manager.

As part of the search process, Avery has conducted targeted community outreach to gather public opinion on the qualities the public would like to see in Lafayette’s permanent City Manager. Those efforts included a Town Hall meeting, interviews with Councilmember-selected individuals (each Councilmember suggested three individuals to be interviewed), social media posts, the development of a recruitment brochure, and a detailed community survey.

Avery reported to the Council that to date there are 35 candidates who have applied for the position. The Councilmembers agreed on the following timeline for the recruitment process:

Per Avery’s recommendation, the candidate selection and interviews will be conducted in closed session to provide confidentiality for the candidates and ensure that finalists do not opt out of the process should their names become public. The Council may make a final decision on the hiring of Lafayette’s permanent City Manager anytime on or after August 2, 2019. You can watch video of the City Council’s special meeting here: https://youtu.be/ykuSIHeNVlw. And, remember, we want to hear from you. Let us know what qualities you want to see in a City Manager by completing a survey here.

The Pride Flag is Raised Over Lafayette

Last Saturday, June 1st, began with a ceremony led by Mayor Mike Anderson raising the LGBTQ+ Pride flag over Lafayette Plaza, the town’s spiritual and cultural center. What a day it was: glorious in its bright sunshine, birdsong in the air, and a crowd of more than 50 celebrating June as Gay Pride month. Councilmember Cam Burks handed out “Love Lafayette” buttons themed with the Pride colors, as residents of all backgrounds and shapes and sizes, took in the moment.

And it was quite a moment. For the first time, led by Councilmember Teresa Gerringer, the City Council issued a Proclamation recognizing June as LGBTQ+ Pride month in Lafayette. People were in a celebratory mood and all eyes were on the mayor as he raised both the American flag and Pride movement’s rainbow flag. Social media was abuzz too. This comment posted to Nextdoor sums up what many in town were feeling: “This is so awesome! Being a gay man living in downtown Lafayette for less than a year now, I really appreciate the beauty and culture of this city. Seeing this makes me love this city even more than I already do!”

Dogs Had Their Day in the Sun, And a Reading 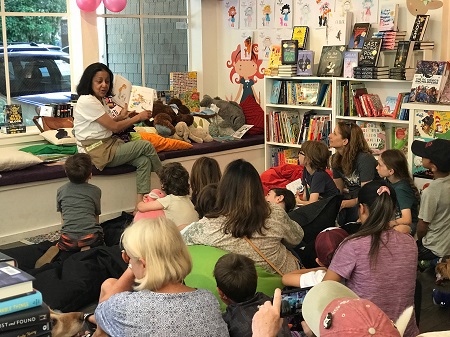 June 1st also saw the return of the much-loved Dogtown Downtown event. This annual homage to our canine companions is always a hit with the fur baby crowd, especially as it seems – for a few hours at least – there are more dogs on Lafayette’s streets than people. This year’s Dogtown had a little twist, however. The Chamber of Commerce encouraged Lafayette’s four-legged friends to stroll through the city’s downtown in a sort of promenade of pups and peeps. One could look down the boulevard and see the streets lined with leashes, water bowls and smiling dog owners stopping into our town’s little shops to fetch doggie treats. Not only were Lafayette businesses welcoming the dogs and their human companions, but Girl Scout Troop #33137 made homemade canine treats, Lafayette’s Interim City Manager Niroop Srivatsa, pictured, conducted a very special doggie reading at Bel and Bunna's Books, there was dog painting at JPG@theBank, a pop-up art gallery, and, of course, dog headshots at the Town Hall Theatre’s photo booth. It is safe to say the pooches had their day in the sun in Lafayette.

Events at the Library

Don’t miss “Summer Reading,” June 8- August 8: This year’s Summer Reading program at the Contra Costa County Library will take you out of this world. The program runs from June 8 to August 8, and will include all kinds of activities and events related to Outer Space. Readers of all ages can visit http://ccclib.org/reads/summerreading/ for activities and challenges to feed the imagination and explore new skills. Visit the Lafayette Library for free and fun happenings all summer. Every completed entry is eligible for a free book and a chance to win prizes! Remember: "Support your Library...Shop at Friends Corner Book Shop!"

It’s Budget Time at the City

We hope you can attend this Monday’s City Council meeting (see details below) where the proposed budget for FY 2019-20 will be on the agenda. We wanted to point out that the City’s budget has several areas that are currently underfunded, including:

While the current finances are not a cause for immediate concern in the next several years, the 5‐year forecast does show a steady decrease in the General Fund reserve from $10M to $9.5M (54%). While this amount is certainly still a healthy bulwark against disaster – both physical and economic ‐‐ staff has previously advised caution in two areas:

Attend the budget presentation, or watch it live on the City’s YouTube channel here: http://bit.ly/LafayetteYouTube

Monday is public meeting night in Lafayette, there are also meetings throughout the week. Unless otherwise noted, public meetings are held at the Lafayette Library & Learning Center, 3491 Mount Diablo Boulevard, Lafayette. To view all of the week’s public meetings please visit our full calendar.

Photo for the Week 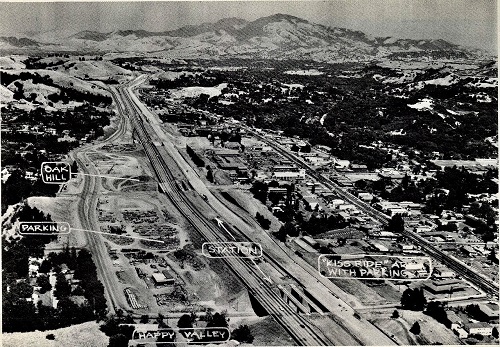 In this undated photograph of the planned layout for the Lafayette BART station, courtesy of the Lafayette Historical Society, the “South Parking Lot,” as we now call it, was indicated as the “Kiss Ride Area with Parking.”

Quote for the Week

The Roundup is prepared each week for the Lafayette City Council, staff, and the Lafayette community. If you have thoughts about this week’s Roundup or a contribution for next week’s edition, please contact the City of Lafayette's Communications Analyst, Jeff Heyman, at jheyman@ci.lafayette.ca.us. You can subscribe to The Roundup and learn more about Lafayette’s publications and social media sites here.