Bay Area weather: How hot was it last night? Is this heat wave almost over? - The Bay Area did not experience a cool down overnight as temperatures early Wednesday morning hovered above 70 degrees in San Jose, Oakland and San Francisco. (BANG)

From the Lamorinda Weekly

Outdoor summer entertainment opens in Lamorinda -Residents of Lamorinda won’t have to venture far from home to enjoy entertainment options this summer. Orinda will be offering a series of concerts, including the annual Opera in the Park, as well as five family-friendly movies. The Orinda concerts, at which food trucks will also be available, will be on Tuesday evenings, from 6:30 to 8:30 p.m., ...

Lafayette rainbow flag flies to celebrate LBGTQ+ Pride month -The city council voted at its May 28 meeting unanimously in favor of a proclamation to recognize June as Lesbian, Gay, Bisexual, Transgender, Questioning + Pride month in Lafayette. On June 1 Mayor Mike Anderson raised the rainbow flag on the pole in Plaza Park, where it will fly for the entire month.

City nails down timeline for selection of permanent city manager -The city council held a special meeting June 4 with  Paul Kimura, principal of Avery and Associates, the executive search firm hired by the city to recruit the next permanent city manager following Steven Falk’s resignation last year. It is likely that the position will be filled in early August.

Nonprofit builds momentum in bid to `Light up the Park Theater’ -The city council heard a presentation May 28 from Tracey Farrell of the newly formed Park Theater Trust as momentum builds around the possibility of purchasing and operating the historic Park Theater cinema.

Is Lafayette going to the dogs? -Every dog has its day - and that day in Lafayette was June 1, when the Lafayette Chamber of Commerce hosted Dogtown Downtown for the benefit of canines big and small. This year the annual event focused on highlighting the dog-friendliness of the downtown area.

Council approves pay raise for town manager -At its May 22 meeting, the Moraga Town Council approved by a 3-1 vote a salary increase of 8.5 percent for Town Manager Cynthia Battenberg to be retroactively effective March 12.  Battenberg was hired March 12, 2018 at a salary of $197,000, which was amended to $206,020 on June 1, 2018 due to the town no longer paying a portion of Battenberg’s employee contribution to CalPERS, in an amount equal to 5 percent of the manager’s salary.

Moraga Arco armed robbery suspects captured in high-speed chase -The whole scenario was like something out of a movie or TV show, except that it actually happened in Moraga. Around 8 p.m. on Sunday, May 26, during the Memorial Day weekend, three suspects arrived at the Moraga Arco Car Wash and Gas Station, 425 Moraga Rd., with the intent to commit armed robbery.

Orinda reaches a settlement to open the 53 Rheem easement soon; pays property owners $45,500 -Following a June 4 closed session, Orinda Mayor Inga Miller announced that the long-running controversy over the easement across the property at 53 Rheem Blvd. had been settled, avoiding threatened litigation.  Property owners Kent and Dawnette DeSpain have agreed to grant the city an easement for pedestrians to walk the trail that leads from Rheem Boulevard to Parkway Court from dawn to dusk.

After ConnectOrinda Celebration, city council favors near-term projects -A plan to show off one of the near-term projects for downtown Orinda, the use of Vashell Way as a pedestrian area got washed out by wet weather, but was rescheduled and held inside on May 28.

ConFire powers up to head off dangerous fire season ahead -A comment from Steve Hill, public information officer for the Contra Costa County Fire Protection District, sums up what lies ahead this summer for much of Northern California - especially Lamorinda.

The story behind the emergency preparedness and evacuation guide -The idea to publish the Lamorinda Guide to Wildfire Preparedness and Evacuation, delivered to residents’ homes in late May, arose from a trip to Napa after the 2017 firestorm that burned 245,000 acres and destroyed more than 8,000 structures in Northern California.

Taco Bell reopens in Moraga -After over a year of delays, the newly remodeled Taco Bell, located at 410 Moraga Road in the Rheem Shopping Center, officially opened on June 5. Just in time for warm summer days, outdoor seating with purple umbrellas makes a noticeable first impression to arriving customers. The restaurant itself has undergone a from-the-ground-up remodel.

Woodstock in Lafayette -The Fog City Swampers brought the sounds of Woodstock to the Plaza Park June 7. With plenty of tie-dye in evidence, the Chamber of Commerce transformed the Plaza to mark the 50th anniversary of the famous festival.

Volunteers overhaul petanque courts, welcome community to the sport -This year marks the 30th anniversary of the Lamorinda PÇtanque Club. And the courts have never looked better.

Although some standouts, ‘Women on the Verge’ misses the mark -Pedro Almadovar’s movie “Women On The Verge Of A Nervous Breakdown” was a cult movie of the `80s, fun, irreverent, provocative, and sexy; it ignited a whole generation of Europeans and Americans alike. Now the question is: Does the play presented at Town Hall Theatre live up to its title?  Unfortunately not.

Saklan students perform `West Side Story’ -The Saklan School presented its 11th Annual Middle School Musical at Town Hall Theater in Lafayette May 17 and 18 with the Broadway Musical “West Side Story,” School Edition with Grace Chaffey, the Music and Performing Arts teacher at Saklan directing the show.

Doggone Fun Fest planned for June 23 -The Orinda Park and Rec Foundation is once again holding its Doggone Fun Fest from 1 to 3 p.m. Sunday, June 23 in the Community Park - a great event for kids and pooches alike.  This free event will feature agility and obedience demonstrations, the sheriff’s canine unit demonstration, many contests, the doggie parade (costume optional) and a raffle.  Come join the fun!

Girls Scouts achieve ‘trip of a lifetime’ goal -What can 13 eighth-grade girls accomplish with determination and hard work? The trip of a lifetime, according to the Girl Scouts of Troop 32886.

NCL Acalanes Area Chapter reflects on incredible year of rewarding volunteer service -The Acalanes Area Chapter of the National Charity League held its annual Tea and Recognition Ceremony April 14 at the Saint Mary’s College Soda Center. NCL is a mother-daughter organization that focuses on philanthropy, leadership and cultural awareness.  Each year this special event allows the organization to recognize and celebrate the volunteer service of its Chapter members.

White Pony Express pushes to reach “Three Angel” $300K Matching Fund Challenge -Every day, 364 days a year, White Pony Express trucks deliver 6,000 pounds of surplus food to people who are hungry in local communities.  In addition, WPE delivers 10,000 items of new or like-new clothing, toys, games and books each month to families in local neighborhoods. All of this is done free of charge.

Campo senior recognized for Leo Club service and leadership -Eleanor Kim, a senior at Campolindo High School, received a $1,000 scholarship for her community service and leadership in the Leo Club at the school. The award was presented to Kim by Dan Hagan, a member of the Moraga Lions Club. Kim will be attending UC Berkeley in the fall.

Fire Season is Here: Sign Up For CWS Alerts

Summer Movies in the Park at Orinda 2019

Though some Pacific Gas & Electric employees lost their homes in the deadly Camp Fire, they’ve still been the targets of vitriol as they race the advent of another potentially catastrophic dry season. (The San Francisco Chronicle)

Is San Francisco Ready to Pass a $600 Million Housing Bond? -"It's stunning," says Myrna Melgar, president of the San Francisco Planning Commission. "We thought we were in a crisis in 2015. Here we are: it's only gotten worse." (Next City)

15 US Cities on the Verge of a Housing Crisis -There are 15 metro areas across the country on the verge of a housing crisis based on how their markets have performed since the housing bubble burst a decade ago, according to an analysis by 24/7 Wall St. The metro areas of Greeley, CO; Denver; Fort Collins, CO; Austin, TX; and Nashville, TN are the top five most at risk. (Smart Cities Dive)

How to Cut 10,000 Parking Spaces without Anyone Complaining -A new short film celebrates bike-friendly Amsterdam's no-drama strategy for eliminating car parking: "It's not a big deal here."CityLab”

Forbes is out with a new ranking of the best employers in every state. Here's California's top 194 employers…Story.

At PG&E, a workforce on edge — and under attack — as fire season arrives… Story.

Who's Checking Your Neighborhood for Flammable Brush? Maybe No One… Story.

Utilities in fire-weary California strategize for the long, hot summer…Story.

California wants to offer Medicaid to undocumented immigrants. How much would it cost?...Story.

Why thousands of marijuana convictions were reduced and others were not… Story.

Black-and-white film is making a comeback in Japan. A year after discontinuing the offering, Fujifilm has yielded to consumer pressure to bring it back. 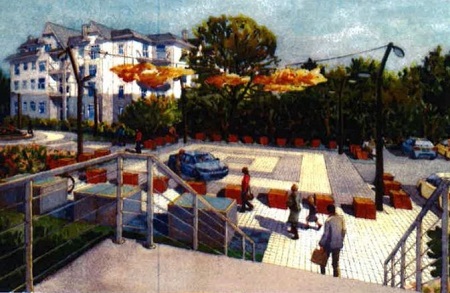 This artist rendering was included in an East Bay Times story on the Lafayette BART station south parking lot project. See Top Story, above. (Graphic: East Bay Times via the City of Lafayette)