Safe parking program for homeless residents gets green light in Walnut Creek -People struggling with homelessness could find some safety at night in the form of a new program. (East Bay Times)

Bad Apples: Walnut Creek Police Looking For This Trio After Sunday Apple Store Theft - Three females entered the Apple store on S. Main St. in Walnut Creek and stole 16 iPhones, reportedly shoving an employee on their way out of the store and fleeing in a silver 4-door Honda Civic. (News 24/680)

Thirteen charged in cross-bay drug trafficking conspiracy – A complaint describes drug dealers housed in the East Bay and carpooling across the Bay Bridge who distributed heroin, cocaine, methamphetamine, and fentanyl in the Tenderloin. (Contra Costa Herald)

Who’s A G’boy? Bear – And He’s Just Joined The DA’s Office To Assist Crime Victims -The Contra Costa County District Attorney’s Office is excited to announce a facility dog “Bear” will be helping victims of crime during all aspects of a criminal case, especially children. (News 24/680)

'Absolutely catastrophic': Northern California braces for more PG&E shut-offs -The impacts may be extreme and unprecedented, cutting entire cities off from the electric grid for several days in the worst-case scenarios. (SF Chroncile)

PG&E is accused of trying to dodge wildfire responsibilities - PG&E -- already a convicted felon for federal crimes it committed before and after a fatal gas explosion in San Bruno -- is under fire because of the company's attempts to convince a U.S. bankruptcy judge to predict what how a jury would. (East Bay Times)

Morgan Hill survives internet, cell outage -Many residents and businesses in Morgan Hill spent most of the day and evening Aug. 8 without Wi-Fi or cellular service. (Morgan Hill Times)

More than 37,000 Kaiser workers in California vote to authorize a strike - Kaiser has made an offer that includes raises and preserves a pension plan, but employees say co-pay increases wipe out a chunk of their raises. (BANG)

U.C. Irvine nabbed the top spot in Money magazine’s college rankings, which were based on a range of factors that point to value and quality of education over prestige. Seven other U.C. campuses, Cal State Long Beach and Caltech also ranked highly. (Money)

State lawmakers returned on Monday after a monthlong break. Here’s the legislation they’ll be looking at. (CalMatters)

Will California Protect Tenants? -Assembly member David Chiu’s AB 1482 provides statewide rent caps and just cause eviction. Governor Newsom is on board. It would be an historic win for tenants, whose state agenda has been strangled by Big Real Estate. (Beyond Chron)

Huge Rejected Housing Project May Be Revived Due to Pressure from State Officials -Facing possible lawsuits and state fines over its recent rejection of the 425-unit project, the San Bruno City Council will meet privately in the coming weeks to consider its options for the proposed development. (San Francisco Chronicle)

New Oregon Law Encourages Affordable Housing Options -Under the new law, cities in Oregon with more than 10,000 residents must now allow for the construction of some type of what's known as "missing middle housing," or housing types that are somewhere between high-rise apartments and single family homes. (KTVZ)

Before Google Maps and Waze told drivers how to get around Los Angeles, thousands of families kept a Thomas Guide in their back seats or glove compartments. Now, with the apps’ “egocentric” routing, have we lost the ability to see L.A. as a whole? (CityLab)

Six people wanted to help cut $3.5 million from budget -Cities around California now have to make up the missing pension funds. Santa Monica will be paying down its unfunded liability over the next 13 years. (Santa Monica Daily Press)

City Council to vote on response to grand jury report -The city concurred with a finding that changes in health plan rates announced by CalPERS were not brought before the council or public. (TheReporter.Com)

Police fear 'suicide by cop' cases. So they've stopped responding to some calls

Events announced around 2019 elections in Lafayette -KATC will be airing the Lafayette Mayor-President debate/ forums.

Pompeii had sorcerers. A box full of colorful crystals and symbolic objects was found alongside a group of women in one house. 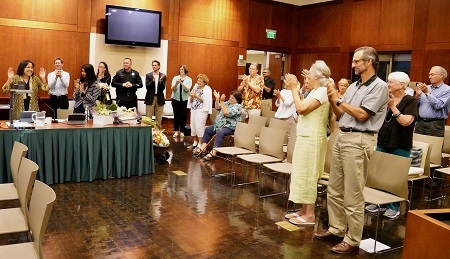 Lafayette has a new City Manager this morning. Last night, a contract for Niroop Srivatsa (left in photo) to take the helm was unanimously approved by the City Council. See Top Story, above. (Photo: City of Lafayette)