Hundreds of tenants — many of whom are older — are facing eviction in the East Bay as developers prepare to convert their apartments into low-income housing. It’s part of a damaging trend, advocates say. (San Francisco Chronicle)

EBMUD readies for next major quake by replacing aging pipes - In the event of a massive quake on the Hayward fault, the USGS predicts that people could be without water anytime from six weeks to six months. (East Bay Times)

From the Lamorinda Weekly

Boaters lap up the last days of summer on the Res -Although the kids are back in school and Labor Day is over, summer fun doesn’t have to be a distant memory. With some of the area’s best weather still to come there is always fun to be enjoyed right here in Lamorinda, in Lafayette’s jewel - the Res, as it’s known. And what better way to relax on a sunny day, than on the water?

Long-sought workshop on Orinda private roads may lead to progress -At least two ideas about private roads seemed to be points of potential agreement between the city of Orinda and the residents of its private roads at a recent workshop.  One is that the issue of greater city involvement, one way or another, in the maintenance of private roads should be bundled together with the future funding for repair work on the city’s aging sewers and drains.

Lafayette artist donates time and talent; paints mural at Rec Center -The Kindergym room at the Lafayette Community Center has a new look in the entrance area - a local artist has donated time and talent to create a beautiful butterfly mural that is designed to suggest freedom and movement as the children come in.

Movie night in the plaza - free fun for the youngest film buffs -The weather was near-perfect Aug. 23 as families enjoyed their Friday evening weekend kickoff with a movie in the plaza. The kids were held spellbound by the Pixar movie “Wall-E.” Some took advantage of picnic delivery from nearby Sideboard while many others brought their own picnics from home to enjoy on blankets or lawn chairs.

Town attorney briefs council on pending lawsuits -To paraphrase Dorothy from “The Wizard of Oz”: Landslides and sinkholes and lawsuits, oh my! During the regularly scheduled Moraga Town Council meeting on Aug. 28, Mayor Roger Wykle reported on a Special Closed Session held prior to the meeting, stating, “We received a report from legal council.

Town hires new associate civil engineer -Associate Civil Engineer Mark Summers began working for Moraga on July 29. Somewhat of a local, he was born in San Francisco and currently lives with his family in Walnut Creek.

‘Town of Moraga’ signs get an overdue facelift -There are four signs that greet first-time visitors and residents entering Moraga. For years those first impressions of the town had become shabby with neglect. Thanks to the efforts of prospective Eagle Scout Harnoor Lal, three of the four signs have been refurbished. Not stopping there, he will also repair the Moraga Library’s sign.

Orinda takes next step toward downtown development - RFP for Downtown Precise Plan -Development of downtown Orinda has been on the front burner for some time now, with the focus being on the Streetscape Master Plan as developed by ConnectOrinda.  While that project focuses only on public property, the city is now moving forward with a downtown precise plan that will address planning issues for private property.

Green Infrastructure Plan adopted by Orinda -The Orinda City Council unanimously adopted a Green Infrastructure Plan on Aug. 20.  The plan, which the city asked staff to develop in 2017, was presented at the city council meeting by Associate Engineer Scott Christie and was developed in collaboration with the city’s environmental consultants, Nichols Consulting Engineers, as well as other Contra Costa County municipalities.

Orinda police chief goes back to school -Orinda Police Chief Mark Nagel announced his retirement after 20 years with the Contra Costa Sheriff’s Office, including the last six years as Orinda’s chief of police. However, Nagel didn’t go far. On Aug. 26 he started his new position at his alma mater, Saint Mary’s College, as the director of public safety.

MOFD hosts international disaster preparedness seminar -The Moraga-Orinda Fire District hosted a portion of the U.S. Forest Service International Disaster Seminar Aug. 19, a program that brought together response professionals from around the world to help them improve their ability to respond to natural disasters. Twenty-five participants from 19 countries participated in the seminar, which covered three weeks in various locations of Northern California.

ConFire prods Lafayette School District to address code violations -The Lafayette School District was ordered by the Contra Costa County Fire Protection District to clear up the fire code violations and implement fire district recommendations at each of its five city schools, before ConFire conducts a fourth and hopefully final inspection of the five schools during the first week of September.

How the newly structured Lamorinda school calendar came about -A combination of factors including anxious students, concerned parents and financial considerations brought about the earliest ever start to the 2019-20 school year at Lamorinda K-8 and high schools, with the new calendar featuring a one-week Thanksgiving break, a one-week spring break and the conclusion of the high school first semester prior to a two-week winter break.

Orinda agrees to accept donation of $25K to beautify Miner Road bridge -Although city staff recommended against it, the Orinda City Council unanimously voted to accept a donation of $25,000 from residents to beautify the bridge on Miner Road that had to be replaced as a result of the 2017 sinkhole.  The proposal was brought to the council by Director of Public Works Larry Theis at the request of Orinda Garden Club members Daphne Bertero, Pamela Goode and Cathleen Sodos, immediate past president of the club.

‘Balloon’ - a riveting true story at the Orinda Theatre -There is nothing like a well made movie based on a true story to make viewers feel and reflect on the extraordinary experience of ordinary people. “Balloon” is one of these movies, a historical thriller set in East Germany in the 1970s, when trying to cross the iron curtain meant risking death for those who dared to try.

Gold Coast Chamber 20th anniversary - Raising the bar of excellence -This year marks the 20th anniversary of the Gold Coast Chamber Players, led by Pamela Freund-Striplen in Lafayette. Over the past two decades GCCP has performed memorable chamber music, from baroque to contemporary, featuring composers from faraway lands to those closer to home - sometimes attending the American premiere of their creation - and always with groups of top-notch musicians invited by Freund-Striplen.

Environmental youth activists make plea to local town council -Roughly one year ago, Rio (who asked not to use his last name) became depressed after family friends lost their home to the Paradise Fire. That, coupled with continual media coverage about climate change and the environmental timeline of 12 years left to decrease emissions before irreversible damage to the Earth sets in, made him distraught over mankind’s future.

Campo students send 1,000 textbooks overseas -Campolindo students Emma Ngo and Amrita Malhotra raised $1,000 through a GoFundMe campaign to ship about 1,000 science textbooks to the International Book Project headquarters in Lexington, Kentucky. The two found these science textbooks in the dumpster at the high school at the beginning of summer when they were biking around there, and found out that the textbooks were being dumped due to changing science standards in California.

La Finestra Ristorante shares stuffed bell pepper recipe -Our publisher, Andy Scheck, tipped me off about some amazing stuffed yellow bell peppers that were recently served as a special at La Finestra Ristorante of Moraga.  Apparently there were only 20 of these delicious nuggets available, and Andy felt lucky to have one of them. With garden harvests in full swing, I thought it would be a wonderful recipe for using homegrown bell peppers.

Gov. Gavin Newsom gave Assembly Bill 1482, one of the last standing protections for tenants, a big boost by lowering its ceiling on rent increases to 5 percent per year and extending the legislation’s life span. (Curbed San Francisco)

Spin may be first SF e-scooter company to unionize in bid for permit -The precursor of Spin's labor peace agreement is the “labor harmony” agreement. (San Francisco Examiner)

How San Diego's Housing Shortage Became So Dire -More than any time in history, Californians say housing affordability is a big problem – and the 71 percent of San Diegans who say so is higher than previously. (Voice of San Diego)

Secrets to Success in Managing a Pension Fund -The Pension Fund Board of the City of Tampa uses a 20-year timeline for its beneficiaries. (Bloomberg)

California's version of C-SPAN is shutting down. It's a loss for the Capitol — and the public."

Cities ask community on how to spend millions on local housing and community development -The City of Lafayette asks for input on guiding for the funding each year, but this time the request is looking at the next five years.

OK is the most spoken word on Earth. It’s only been used for about 180 years, but its linguistic history still retains some mysteries. 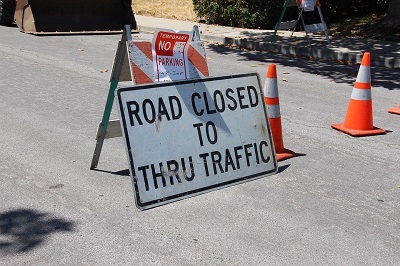 Happy Valley Road between Sundown Terrace and Bear Creek Road will be temporarily closed so that work on the North Orinda Shaded Fuel Break Project can be completed. See Local News, above. (Photo: News 24/680)