Grand opening ceremony for new fire station in Lafayette –‘Having this resource staffed within the hills of Lafayette will allow us to get to fires when they are small and keep them small," said the Contra Costa Fire Protection Chief. (KTVU)

Exposed gas pipeline alarms grassroots group-PG&E, the California Public Utilities Commission, Lafayette, Save Lafayette Trees and residents have been meeting as a task force since September. (The Mercury News)

PG&E Outage: 1500 Without Power in Walnut Creek County, California after Power Lines Fall Down -Nearly 1,500 people were without power in California last night due to an issue with a PG&E transformer. (Newsweek)

BART tracks near Hwy 24 to be open during Fleet Week -Getting to the Bay Area's annual Fleet Week in October just became a bit easier, as did commuting to Lafayette's annual Art and Wine Festival. (East Bay Times)

BART Track Work Ahead Of Schedule -BART officials said Monday that some planned track closures near the Lafayette station on upcoming weekends are no longer needed. (Patch)

‘Murder for Two’ in Walnut Creek

On Sunday evening, fires were burning across parts of Northern California, prompting some evacuations. (The Sacramento Bee)

Realtors Play Hardball in Fight Against Rent-Protection Bill -California Realtors are going all out to defeat AB 1482, which imposes statewide rent caps/just cause eviction laws. The floor votes are this week. Much of the business community, including the CA Business Roundtable, is strongly backing the bill. (Beyond Chron)

Coast Guard Land Still Eyed For New Concord Housing Development -After five years of discussions and negotiations, the City of Concord and the federal government are getting closer to an agreement. (Patch)

A 'Cat and Mouse Game': PG&E's long record of run-ins with regulators and courts

Richmond police union votes 'no confidence' in chief of police

Some retired public employees' pensions bigger than their salaries were

Lafayette's Buchanan Garage stands empty, condemned as symbol of development debate -Elected officials are split between representing the interests of the City of Lafayette and representing outlying areas. 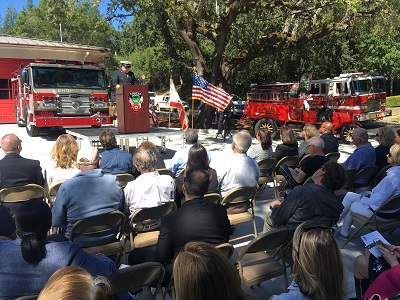