Production Note: Due to a staff member being out of the office, the Almost Daily Briefing will not be published tomorrow.

Around Lafayette: County's newest fire station open for business -If you haven't yet ventured out, fall is a great time to participate in the Lamorinda Trails Challenge. (Lamorinda Sun)

BART Says Track Work Near Lafayette, Highway 24 Ahead of Schedule -BART officials said Monday that some planned track closures near the Lafayette station on upcoming weekends are no longer needed. (CBS SF)

Richmond Police Chief Allwyn Brown has resigned after the local police union voted "no confidence" in him. (East Bay Times)

6 Potential Cases of Vaping-Related Lung Illness Reported in Bay Area -The California Department of Public Health on Tuesday said it has identified 62 potential cases since late June of acute lung disease in people with a recent history of vaping. (KQED)

What you need to know about delays at SFO — and how to possibly avoid them -Is it worth it to switch your flight to another airport? Here are details of the timeline and how airlines are accommodating change requests. (BANG)

Thousands of PG&E customers will be without power during planned North Coast shutdown -The work is not part of PG&E's official Public Safety Power Shutoff program, but is part of the utility's safety strategy. (San Luis Obispo Tribune)

California Hospitals And Nursing Homes Brace For Wildfire Blackouts -In a controversial move approved by state regulators, Pacific Gas & Electric, which provides power to 16 million people in Northern and Central California, plans to be more aggressive in cutting power to broad regions of the state when the chance of wildfire is high. (California Healthline)

California’s top insurance regulator has apologized for taking campaign donations from the industry after he said he wouldn’t. He said his campaign had set up meetings. But newly released records show he knew he was meeting with insurance industry representatives for fund-raising purposes. (The Sacramento Bee)

A landmark rent cap and eviction protection measure, Assembly Bill 1482, has almost made its way through the Legislature. The bill has been negotiated at length and landlords have opposed it fiercely. (The New York Times)

California Labor Bill, Near Passage, Is Blow to Uber and Lyft - “A.B. 5 is going to pass,” said State Senator Scott Wiener of San Francisco, Uber and Lyft's hometown, who supports the bill. (The New York Times)

San Mateo weighs housing requirements -In light of an expected increase in the number of housing units San Mateo will be required to build by state mandate, city officials voted against forming a San Mateo County subregion for the Regional Housing Needs Allocation out of concern the city may face challenges in meeting its own increased demand for housing in the coming years. (Daily Journal)

San Jose to consider forgivable loans for backyard cottages -Dubbed by some lawmakers as a "Yes In My Backyard" initiative, the program would provide property owners a forgivable loan up to $20,000 for planning, permitting and other pre-development costs associated with building accessory dwelling units (San Jose Inside)

Unions pour cash into CalPERS election, use mailer to highlight sexual harassment complaint -One of California's largest unions is spending big money to prevent one of its former leaders from winning a seat on the CalPERS Board. (Sacramento Bee)

California pension mistakes would cost cities — not retirees — under proposed law -Under current law, when CalPERS determines it is paying a retiree too much, the retiree loses the difference, and can be held responsible. (Sacramento Bee)

Mayes expects to get $10M in homelessness funds for Palm Springs

California Bill Puts Recycling Onus on Plastic Manufacturers. They're Not Happy About It

Ghost crabs have terrifying stomach rumbles. The crustaceans scare off enemies with noises from within their gut, freeing their claws for fighting and defense. 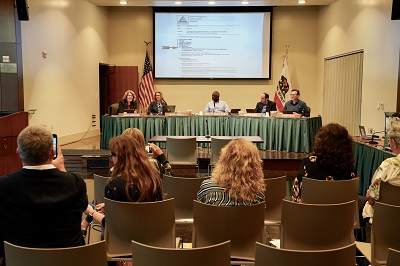 The Lafayette City Council decided at its Monday meeting to send a letter supporting the Acalanes Union High School District, which has the highest e-cigarette rates in Contra Costa County, in a federal grant application to combat vaping. See Top Story, above. (Photo: City of Lafayette)