Clayton man accused of setting fires near trail, homes -The Contra Costa County District Attorney's Office has charged him with three counts of arson and one count of recklessly starting a fire. (The Mercury News)

A magnitude-3.9 earthquake struck the Bay Area on Saturday morning. Here’s a refresher on what you need for an earthquake preparedness kit. (New York Times/Curbed SF)

'Toxic secret': Trial opens for renowned ballet teacher accused of raping, molesting East Bay students -It was a dream opportunity for the aspiring ballerina. Her parents bought her $75-an-hour lessons at a studio in Walnut Creek. (San Francisco Chronicle)

Walnut Creek woman arrives home to find stranger inside -A woman received an unwelcome surprise Wednesday night, when she showed up to her home and found a man inside. (East Bay Times)

Walnut Creek Woman Sentenced to 2 Years in Prison for Mail Theft -A Walnut Creek woman was sentenced on Wednesday to more than two years in prison for breaking into mailboxes in a San Francisco apartment. (NBC Bay Area)

Live Animals At The Library: Lafayette

A deadline for wildfire victims to file claims is less than three weeks away. As many as 70,000 Californians who suffered losses linked to PG&E’s equipment could be left out. (The New York Times)

A Marin County lawsuit may test the constitutionality of inclusionary zoning, which local jurisdictions rely on to expand the supply of affordable housing. (CityLab)

Even high-earners are feeling the pinch after housing affordability declines -In the second quarter of 2019, the median price of a single-family home in the U.S climbed to a record high, reaching $266,000. (HousingWire)

San Jose taxpayers could be on the hook for up to $1.4 million to fight a lawsuit filed against the city by a group of high-profile retirees who say they were shortchanged in their pension plans. (San Jose Spotlight)

What we'll lose at the water's edge

Silicon Valley pioneered self-driving cars. But some of its tech-savvy residents don't want them tested in their neighborhoods

Sprinklers and gadgets won't save your home from a wildfire. What your neighbor does might

Lafayette sees a significant rise in bank robberies since last year -The city of Lafayette has reached its record for the number of bank robberies within the last five years.

Theresa May is mulling a murder mystery. The former UK prime minister said she’d rather write a novel about an ill-fated Alps expedition than a political memoir. 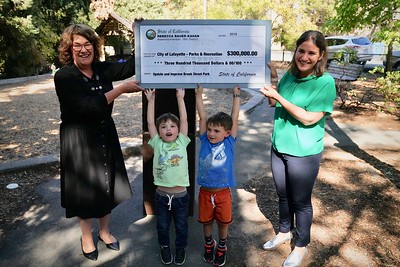