Publication Note: The Almost Daily Briefing will not be published the week of November 4-8, 2019.

Busy Skies Over Lafayette Sunday -Lafayette resident Richard Usinger had a ringside seat for the aerial ballet played out in the skies over his city Sunday, air tankers of various sizes and description called in to help fight a devastating fire. (News 24/680)

Martinez Hit With Widespread Outage Not Related To PG&E Shutoff -We will share more details as they become available," officials with Contra Costa County wrote on Twitter. (Patch)

Alameda County bans mutton-busting; Haggerty votes no, tells proponents to eat salad- Mutton-busting is no longer allowed at Castro Valley's Rowell Ranch after the Alameda County Board of Supervisors banned the rodeo event in which young children ride sheep like a bronco. (EB Citizen)

Say ‘I Boo’ with a Halloween ‘scare-amony’ in Contra Costa County -Contra Costa Clerk-Recorder will have costumed officiants to tie the knots on Halloween. (East Bay Times)

Couple Accused Of Burglarizing El Dorado County Home During Public Safety Power Shutoff -Two people are accused of using the rolling power shutoffs as the opportunity to steal from a home. (CBS Sacramento)

PG&E refunds planned only for one big intentional blackout, power restorations widen- Because of an array of blunders by PG&E in connection with a massive power shutdown that began on Oct. 9. (East Bay Times)

Menlo Park: Caltrain protesters call for agency to pass affordable housing policy -According to the Housing Leadership Council, the Caltrain Board of Directors has been talking since 2016. (The Almanac Online)

Special Podcast: Sizing Up California's Housing Shortage -Scott Weiner, the author of Senate Bill 50, which would allow for increased density near transit. (Voice of San Diego)

Urban and Suburban Lifestyles Are More Similar Than You’d Think -A new study finds strong similarities in how residents of U.S. cities and suburbs spend their time—with one, counterintuitive difference. (CityLab)

Halloween treat coming to top of Salesforce Tower again -All eyes on the skyline this All Hallow’s Eve. (Curb SF)

CalPERS raises materiality concerns over SEC disclosure reforms -CalPERS is concerned about how companies would treat materiality in their regulatory disclosures under SEC plans to modernize corporate reporting. (Corporate Secretary)

These Santa Rosa residents just rebuilt their homes. Then came the Kincade fire

Is your city ready for California's next recession?

Ahead of renter protection law, reports of an eviction rush

These longtime San Francisco businesses all died this year

A Halloween event in an empty NYC store shows creativity. Landlords are using pop-ups and short-term leases to fill space. 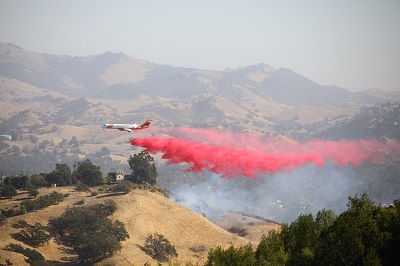