Sheriff steps up patrols in Lafayette, Orinda after home invasions -It was a frightening ordeal for a man who suddenly saw three suspects, armed with a pistol inside his home. (KRON)

Please note that there will be a special meeting of Lafayette’s Public Safety Subcommittee on Wednesday, December 4, 7:00 p.m., at the Lafayette Veterans Memorial Center, 3780 Mount Diablo Boulevard, in Lafayette. Items to be discussed include an update from Lafayette Police Chief Ben Alldritt, and a discussion of recent crime in Lafayette and ideas for community involvement to augment crime prevention. You can read the full agenda here.

'We're here to rob you': Concord man describes being tied up, robbed during home invasion -Seventy-three-year-old John Panieri says he was tied up and robbed at his Concord home on Wednesday night. (KRON)

Officer-Involved Shooting Investigated in Concord: Police -A Contra Costa Fire District official confirmed two people were taken from the scene to a hospital. Their conditions were not provided. (NBC Bay Area)

Much of Northern California was under a winter storm warning as snow continued to pummel the Sierra and snarl roads. (The Sacramento Bee)

PG&E Admits to More Than 200 Damage Incidents That Could Have Started More Wildfires -Post-blackout inspections showed 218 cases of busted equipment that could have made this autumn’s wildfires a lot worse. (SFist)

It's a Wonderful Life in Lafayette Holiday Celebration

Cinderella: A Fairytale in Lafayette

'Once Upon A Christmas' Ballet 2019: Lesher Center, Walnut Creek

Of the 9,304 units under construction in Oakland, fewer than 7 percent — a total of 628 — are subsidized affordable projects. Oakland’s new housing development is outpacing San Francisco’s. It’s complicated. (The San Francisco Chronicle)

When he became California's governor, Gavin Newsom set a bold goal of solving the state’s 3.5 million-home shortage by 2025. But cities are only planning for 2.8 million new homes, a shortage gap that won't be closed without rethinking traditional zoning trends, according to one national nonprofit. (San Jose Spotlight)

Gavin Newsom's climate order focuses on pensions and roads. What does it mean for taxpayers? -Unless the governor is willing to take even more $$$ from over-taxed California citizens, Newsom should step back. (Sacramento Bee)

Gavin Newsom wants to close a California state prison. It won't be easy

UC outsources thousands of jobs to private contractors. Is that a good idea?

Why downtown Oakland is booming

Vinyl, book, and magazine sales are up. Despite the digital doomsayers, people still like owning physical things. 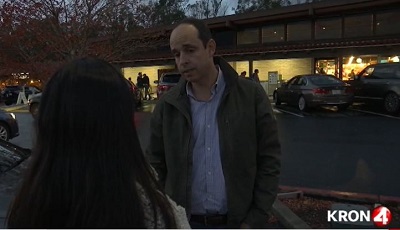 “Our police chief and our entire department is working around the clock to try to get to the bottom of it,” said Cameron Burks, Lafayette Council Member who chairs Public Safety Sub-committee, in an interview with KRON regarding Tuesday night’s home invasion. There will be a special meeting of the Public Safety Sub-committee on Wednesday to discuss recent crime in Lafayette. See Top Story, above. (Photo: KRON)